He brought a vixen to our first date. When he walked into the restaurant she was draped around his shoulders. At first, I thought it a weird fashion statement — fox fur over his black-striped reddish shirt — but then she lifted her head and glared at me.

He hugged me hello. I leaned away, not keen to get close to those sharp teeth, so it ended up awkward. We sat at the table and the vixen slid into his lap. I almost asked about her, but didn’t want to be rude, so I picked up the menu.

I worried the waiter would tell us to leave, but he smiled sympathetically and put a dish of water by my date’s feet. The vixen ignored it and continued to stare at me, yellow eyes narrowed. I stammered while ordering, my cheeks flushed as red as the wine I gulped.

My date had used a recent picture on his profile, not one from when he was twenty pounds lighter. He was kind enough not to mention the discrepancy on my part. I’d spent nearly an hour squeezing myself into a body shaper and picking out a dress that hid splurgy hip and underarm fat. It was a long-sleeved black velvet affair, probably too formal, so I’d gone light on makeup. That was a mistake, I later reflected, examining my blotchy skin in the Ladies.

He said he liked climbing. I said he must be fit. I wanted to ask what he did with the fox while he climbed. Did she sit at the bottom and watch him ascend? Or did she wrap herself around his neck, digging her claws into his shoulders?

He’d been married once. When he told me this, the vixen leapt onto the table, growled at me, and then licked his face. He stroked her ears and coaxed her back onto his lap, laughing self-consciously. He seemed to want to pretend it hadn’t happened, so I smiled and asked if he was enjoying the fish.

I drank too much and talked too much. I guffawed at my own jokes while he only chuckled. I didn’t argue hard enough when he insisted he’d pay. So I was surprised when he slipped his cool hand into mine at the end of the evening and offered to walk me home.

The vixen padded beside him, pausing to sniff drainpipes and lampposts. What did she make of the city, all those doggy scents and discarded cigarette butts?

We kissed at my door. I would have invited him in, but couldn’t face having to wiggle out of the body shaper while the vixen peered down her long snout.

A few days later, we went bowling. I rolled the first few balls into the gutter, but he held my arm and showed me how to swing. As we high-fived, the vixen scampered down the gutter and grabbed a pin. The staff were surprisingly nice about it.

Later, over ice cream, he told me I was the first person he’d dated since the divorce. The vixen sniffed my vanilla cone and took a cautious lick of the raspberry syrup. It seemed like progress.

During the next three months, he came over a lot. While we watched Netflix under a blanket, the vixen stretched herself across both our laps, although whenever I went to kiss him she’d open one yellow eye. She’d growl if my phone buzzed, so I started leaving it on silent, ignoring friends’ calls.

In my bed, his eyelashes twitched as light fell across the pillow. One of his feet lay on top of mine, reassuringly heavy. As I went to kiss him, footsteps padded up the duvet. The vixen settled into the gap between us, wrapped her tail around herself, and half-closed her eyes. I sighed and rolled over.

Over breakfast, I suggested we go to his some time, but he laughed and said my place was nicer. I persisted. Why wouldn’t he let me into his life? The vixen, who’d been licking pancake syrup from my plate, bristled. Finally, I asked the question I’d been longing to ask for months.

She leapt from the table to the windowsill, her tail knocking my plate to the ground. He looked from me to the window she’d scrambled through, as horrified as if he’d found himself naked in public. He stammered an apology, grabbed his coat, and dashed out of the door.

I called him that evening, but he didn’t pick up. When I logged into the dating site, he’d blocked me.

My ears hissed. I started to cry, and that’s when the snake slithered from behind the sofa. I leapt onto a chair to get away.

With magnificent markings of black and reddish-brown, the snake paid no notice to me trying to stamp it with my shoe. Instead, he spiralled up the leg of the chair, blinked his golden eyes at me, and settled himself around my neck.

I tried to pull him off, but he wrapped himself tighter, his scales cool against my overheated skin. For the rest of the day, his weight pressed into my shoulders, making every action ten times more difficult than usual.

When I woke the next morning, the snake was still there. I couldn’t work out how to untangle my arms and legs, so I stayed in bed.

Eventually, I got used to the heaviness. I dragged myself to work, where my office-mates gave sympathetic smiles. I went shopping, covering him with a scarf. I even logged into the dating app.

I took new photos and spent hours trying to crop out the snake before I realised that wouldn’t help. I’d have to take him on dates, where he’d bare his fangs at people who might hurt me. Better to be upfront about it, I thought, running my fingers along the snake’s smooth belly. Maybe I’d find someone who could love me, snake and all. 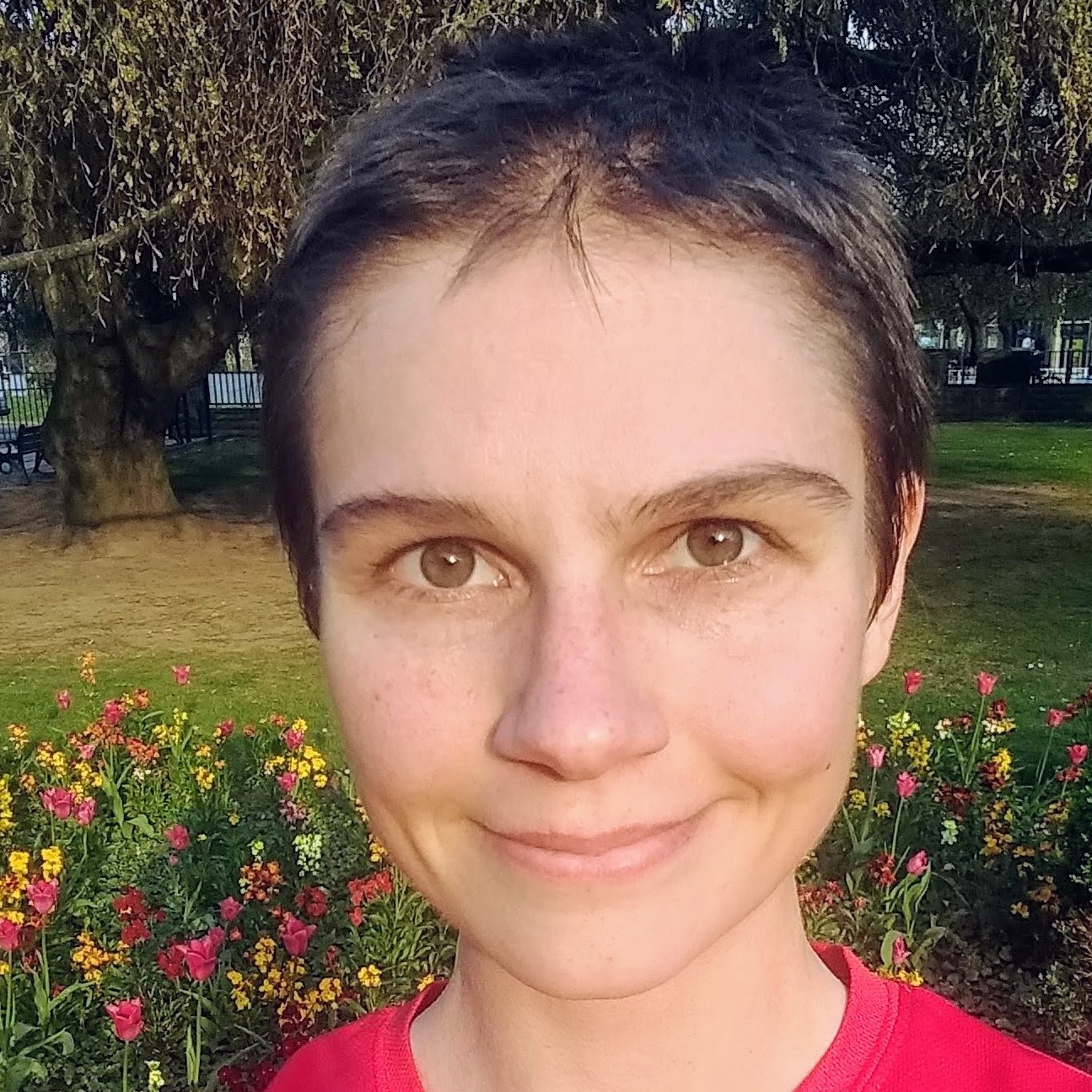 is a speculative fiction writer living in Sheffield, UK. She has a degree in physics, a passion for the Peak District, and an incurable habit of borrowing more library books than it is possible to read during the loan period. Her short fiction has appeared in places such as Escape Pod, On The Premises, and Banshee. You can find links to her stories at www.hannahwhiteoak.me or connect on Twitter @hannahwhiteoak.