Waiting for the Flood OR The Bathers Natalia Theodoridou

The two women are sitting in their beach chairs in the shallow water, low waves and foam lapping at their bare calves. They are both wearing striped, old-fashioned bathing suits, complete with goggles and swimming caps; the tall, thin one is wearing black and white stripes, the other one is striped red. They look to the west, from where the wave will come. There are lots of people standing ashore, or sitting, or lying on the beach, waiting for the flood.

The two women are talking. The red-striped one is counting something with the fingers of her left hand. They look happy, as if they’re not even noticing all the people around them, as if they’re not even waiting for the end of their world. Sometimes they laugh, looking at each other; other times they talk while looking in front of them, eyes wide and staring. They take turns speaking, and each time the red-striped woman adds a finger to her count.

Number three earns the black-and-white woman a soft, tender touch on the shoulder.

Number four has the red-striped one waving her arms around, excited.

Number five takes a while, but when they find it, it makes the black-and-white woman laugh so hard her chair almost falls backward into the rising water—it’s up to their knees now, wetting their thighs and their crotches nestled in the deep beach chairs.

At number six, they bring their chairs closer together, making it easier to touch each other. The red-striped woman rests her head on the shoulder of the other, who turns and kisses her forehead. The red-striped woman starts sobbing at this, and so her companion takes over the counting. They are up to seven now; it takes both hands, but it’s worth it, isn’t it? The black-and-white woman holds up her palms, one open wide, the other with two fingers making a V and she talks calmly, her gaze fixed on the horizon. She stirs the water with her right leg and then glances at the beach, the people holding helium balloons scribbled with messages for the skies:

MAKE ROOM FOR US

WE ARE SO ALONE

Number eight, number nine, these are easy, they go fast, but then the women pause. They both hold their palms in front of them, all fingers extended but one. As if to say, what are we forgetting? As if to say, is that all we have?

The red-striped woman stands up and plods to the shore; there are so many people there now it is difficult to walk without elbowing her way through, taking care not to step on any of the lying ones, the sleeping ones, sprawled like broken mannequins on the beach–how can they be asleep?

She makes her way to the mango trees lining the beach. She reaches with her arm raised up up up as far as she can, balancing on the tips of her toes. She picks a green mango and carries it back into the sea. She hands it to the black-and-white woman, and she breaks its firm skin with her teeth, then peels the skin back and bites into its flesh, orange juice running down her chin. She offers it back to the red-striped woman, who does the same. They take turns until they finish the fruit, then toss the skin and the gnawed stone in the water and watch the stone sink and the skin float away from them–the water now up to their belly buttons, the beach slowly being swallowed and the sleepers drifting into the sea.

The black-and-white woman wipes her chin with the back of her right hand and then uncurls her last finger. Ten good things make a life well spent, no?

Ten, they count, and happy the bathers sail away.

Previously published in Litro, August 2015. Reprinted here by permission of the author. 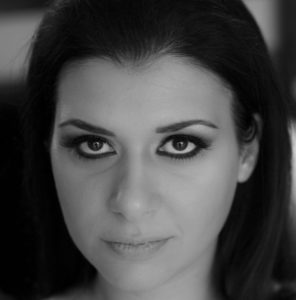 Natalia Theodoridou is a media & cultural studies scholar, and a writer of strange stories. Her writing has appeared in KROnline, Clarkesworld, Shimmer, Ninth Letter, sub-Q, and elsewhere. She is also the dramaturge of Adrift Performance Makers (@AdriftPM), with whom she experiments with combining interactive fiction and immersive, digital performance. Originally from Greece, she has lived in Chicago (IL), London and Portsmouth (UK), and Bali (Indonesia) for several years. She now lives with her partner in lovely Devon, UK, in a house full of books. Find out more at her website, www.natalia-theodoridou.com, or come say hello @natalia_theodor on Twitter.