What I Understand Now Lauren Ferebee

Molly was twenty-four when she woke up one morning, discovered she was already dead, and shortly thereafter asked me to bury her alive. Our paths had diverged after Ole Miss: she got a house and a husband amongst the ancestral oaks of Oxford, while I jetted off to San Francisco for a job in tech.

Being back in Oxford one weekend, I texted her, curious about her charmed life. She met me at a wine bar, impeccably coiffed and dressed in starched white linen, the kind of Southern woman you might imagine extinct if you didn’t know one personally.

She seemed distracted when I outlined my urban life, too-expensive apartment, cutting-edge job. “Technology,” she said, lazily waving her hand over me in some genteel form of conversational exorcism.

Then she leaned over and told me she had discovered she was dead, in the same tone she had once told me she was engaged. “I’m already skin and bones,” she said, pushing a hair out of her face. “No organs. No blood.” Then she smiled, in a way that wasn’t really smiling at all, just pushing her mouth up at both ends.

Molly had pledged Tri Delt like her mother and her grandmother and like me, except unlike them, I was no Southern-bred society girl. I was the accessory, the friend who danced at their debutante balls and again at their weddings. I had lost track of most of the white-dressed girls whose milestone nights I’d whirled away, but Molly had always been the strangest one somewhere underneath.

“Are you unhappy?” I asked her, unable to think of anything else to say.

“Unhappy?” Her laugh was warm but dry, like a practiced handshake. “I’ve never been happier. I always hated it, you know, the feeling of blood running through my veins. Don’t you hate it? Don’t you hate your heart?”

I felt the shameful thump in my chest. In college, she had eaten rarely: cottage cheese, boiled egg. I had followed suit, then gorged myself in my dorm room with chips and chocolate, a secret disgrace.

“I’ve never thought of it that way,” I managed, suddenly aware of my own sweat glands, my own breathing. She eyed me over.

“I thought since you were in town, you could be my gravedigger.” She leaned over conspiratorially, as though we were planning her wedding all over again. “I’ve already picked the spot. We could do it tonight.”

This was the moment I could have told her no, that she ought to get help, talk to her husband, see someone. What can I say, except that when she said it, suddenly I felt like it wasn’t normal to live, that I felt special to be asked on this insane errand? I found myself nodding instead.

“Good,” she said. “You always were the one who understood.” She poured me more wine, and I drank, sealing our bond.

The next thing I remember, I was holding a shovel, standing by the moonlit silhouette of an old, dead tree on campus, whose insides were so hollowed out it was just a shell of itself. It was a place we had come to scare ourselves with stories of ghosts.

In the moonlight, I swear could see straight through Molly’s skin, and she was, indeed, empty, as empty as the tree we stood by. Had she ever been alive? Had she ever been herself? I tried to think back to her wedding, her coming out, dances, parties, and found that I was suddenly unable to see her, save as a blur in white.

She looked at me then, sad and wise, a hollow much older than her body. 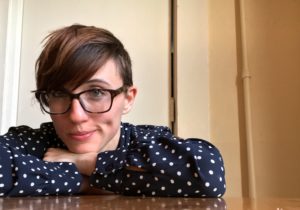 This is Lauren‘s first fiction publication. She is an award-winning theatremaker whose plays have been produced in New York and developed throughout the US. Critics have praised her work as “exquisite” and “a fine balance between laugh-out-loud absurdity and gut-wrenching human drama.” Upcoming highlights include a Chicago reading of her play Every Waiting Heart in Artemisia’s 2018 Fall Festival and three monologues from her play The Reckless Season featured in the 2018 Best Stage Monologues book series (Smith & Kraus). She is currently studying for her MFA at the University of Arkansas. Find out more about her work at www.laurenferebee.com.