From Her Mouth, the Ashes Jessica Jo Horowitz

Lena spoke not in birdsong but in birds. When we first met, her greeting was accompanied by fidgeting wings, the shy hop of a wren. But behind the shyness, there was a strength of will, a quiet fierceness that burned in her eyes and drew me in, past the feathers, past the songs.

Our first dates were in parks, at beaches and outdoor cafes, our conversation mimicked by the chatter of catbirds and thrushes. Some flew off the moment they were spoken into being, others followed us with inquiring eyes, as if wondering if they would be needed for further emphasis.

It made our relationship challenging, and sometimes, secretly, I could not help but wonder what life would be like were she more like her cousins, who spoke butterflies and moths, delicate as dust, silent and short-lived.

“Eva.” They came to me with murmured words, soft wings caressing my cheeks. “Be good to her. She’s looked a long time for someone like you.” Someone with gentle hands and a kind heart. Someone to whom birds would never be the enemy, from whom they would never fear cracked beaks and broken wings.

In the spring, we moved in together to a small place outside the city with plenty of windows and a wooded backyard. When it became warm enough, we kept the windows open. We made do.

Our woods were never quiet. Laughter was a chickadee. An argument was a flock of starlings.

We argued often, over stupid things, quarreling like lovers do. Sometimes, I think we did it just to get our blood up and have an excuse for the make-up ritual that followed, tangling sheets and limbs until we lay beside each other, exhausted, panting, as out of breath as we had been from shouting just a short time before. Pressed close to her, I could feel a fire coiled beneath her skin, flushed red from the beating furnace of her heart, so hot I wondered that it did not consume us both.

“I love you,” she murmured before we slept, filling the quiet dark with the song of nightingales. I held her, the soft hairs at the nape of her neck as light and delicate as down.

A promise was a vulture, circling overhead.

As autumn approached, she grew distant, quiet. I would catch her staring out the window, rubbing arms grown thin and gazing towards the setting sun, watching avian shadows flit across the sill, unbound by words either spoken or unsaid. I could see there was something deep in her bones, calling her away from me to a place she had never been but knew as well as home. A compass where her heart had been, that pulled and pulled and pulled.

I stood behind her, arms wrapped around her waist, feeling how fragile her bones had grown, heart fluttering against the cage of her ribs. She felt light. Hollow. I feared if I held her too tightly, she would shatter, but without a tether to keep her here, she would rise into the air, fingertips brushing the rustling tops of trees, touching the flames of their canopies as she disappeared into the amber light.

For the first time since we moved in, the house was quiet. The rustle of wings that had become our constant background noise, the murmur and clack of restless beaks, even the soft, living quiet of owls. It was all gone, leaving behind a silence that seeped through my fingers and burrowed its way into my bones, weighing down my heart until it was too heavy to even dream of flying.

I tried to fill the space left by her silence, but my words fell lifeless and dull between us. She leaned instead towards the call of wild birds as they swept past on their journey south, a longing in her eyes that hurt to see.

“Lena.” I breathed my love for her into her hair, lips brushing the soft skin where her neck met her shoulder. Her hands took mine, skin hot as fire, as if the burning will I loved so much in her was the only thing keeping her with me, fighting a call I could not hear.

She said my name, but I closed my eyes before I could see it take shape, waited until the flutter of wings faded in the distance. I couldn’t bear to watch my own name flicker out, as free as I would never be.

I ached for the sound of nightingales.

I woke to the smell of smoke and a bitter taste in the back of my throat, aware of the absence beside me before I even came fully awake. I lay there for a moment, eyes closed, holding onto the last moment that she was still there, small hollow at my side still drunk with her fading warmth. Pretending.

When I finally opened my eyes, I saw the shape of her outlined in ash, wisps of acrid smoke still rising from the sheets. In the centre lay a brilliant red-gold feather, barbs scintillating in the morning light. The vanes were soft in my hand, warm, but the rachis sharp as a weapon, hardened in fire.

I imagined her rising from the ashes of her former self, body shiny with heat, fingers unfolding like new wings, curious to touch the air, the sky and everything. I looked out the open window, hoping to catch a glimpse of her between the trees, plumage trailing and brilliant in the dappled light.

I traced the edges of the feather she left behind with my fingertips, noting where the end of the callum was clipped short, as if the words were bitten off before they could be fully said.

A breeze blew in through the window, still soft with the last edge of summer. I strained my ears for the sound of nightingales, faint on the gentle, rushing air as it filled our room and stirred the ashes of her last goodbye. 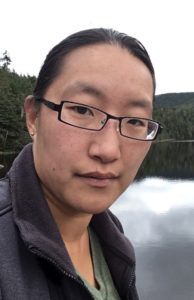 Born in Korea, Jessica now writes speculative poetry and fiction in New England, where she balances her aversion to cold with the inability to live anywhere without snow. Previous works appear or are forthcoming in Apparition Lit, Fireside and others. She occasionally has feelings and opinions, which can be found on Twitter @transientj.