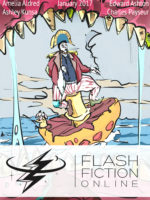 Regret is a concept we approach in different ways.

My son took me up on that one summer at our local amusement park.  He’s not really a roller coaster fan.  But my daughter and I convinced him that if he didn’t ride Colossus at least once he’d regret it for the rest of his life.  Colossus is a double inverted loop coaster at Lagoon in Farmington, Utah.

We all climbed into the car and chatted amiably on the way up the starting hill.  At the top, the coaster takes a turn to the right so you can see both the surrounding landscape and a very clear view of the descent falling precipitously away and toward certain doom.  It’s a sight that still makes my heart skip a few beats, even though I love the ride.

My son reached that point, took one look, and swore.

At the end of the ride, he was shaky and nauseated.  We helped him to the nearest park bench and waited for his stomach to quit flip-flopping.

Now, in 70 years or so, he can take his final gasps from his death bed without wishing he had ridden Colossus.  At the time, though, I’m fairly certain he wished he hadn’t.

I think I like Henry David Thoreau’s viewpoint best:

“Make the most of your regrets; never smother your sorrow, but tend and cherish it till it comes to have a separate and integral interest.  To regret deeply is to live afresh.”

This month’s original stories are each about regret in some aspect or another.  Obsessing about it, giving into it, denying it by taking that leap of faith.

Next up, “Women’s Work,” by Amelia Aldred.

And “A Lumberjack’s Guide to Dryad Spotting,” by Charles Payseur.

In addition, we have “A Woman’s Glory,” a reprint by Ashley Kunsa that first appeared in issue #10 of the Los Angeles Review, and won the A Room of Her Own Orlando Prize for 2011.

Suzanne Vincent is the editor-in-chief of Flash Fiction Online. That’s what people think anyway. Actually, she’s really a pretty ordinary middle-aged woman packing a few extra pounds and a few more gray hairs than she’s comfortable with. As a writer, she leans toward the fantasy spectrum, though much of what she writes is difficult to classify. Slipstream? Isn’t that where we stick stories when we just can’t figure out where else they go? Suzanne’s first professional publication was right here at FFO, published before she joined the staff: “I Speak the Master’s Will,” — a story she’s still very proud of. While she doesn’t actually have time to blog anymore, she once did. You can still read her ancient posts on writing at The Slushpile Avalanche. Suzanne keeps a house full of kids (3), a husband (1), and pets (too many to number) in Utah, USA. Yes, she’s a Mormon. No, there isn’t another wife. Mormons haven’t actually practiced polygamy since the 1890s. Too bad. She’d love to have another woman around to wash dishes and do laundry.